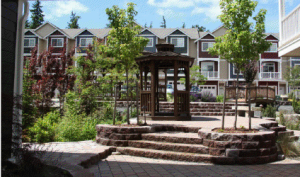 Even the promenade provides for stormwater management

The number one response I get from developers and builders when asked why they do not favor using Low Impact Development (LID) techniques to manage their stormwater is:

“Because it costs too much!”

The fact is LID projects are less expensive to build and typically they increase yield over conventional stormwater management (SWM) systems.

Government Bulletins such as EPA’s “Reducing Stormwater Costs through LID Strategies and Practices”  talks of the social values and costs of LID.

While most developers and builders care about these things, they still need to count the dollars out of their pockets to make a project work in this economy.

From my experience using LID…

Based on multiple projects, Land Technologies, Inc. has designed, permitted and administered through construction, has proven there is an average 20% reduction in cost of the overall site development versus standard SWM.

We have found that even more significant than the savings in expense dollars, are the increased yields and added income dollars. The LID projects also sold well during a “down” economy.

Case #1: A low density single family project was brought to us already designed, using the traditional pipe and detain methods. The site needed several feet of gravel to make the drainage actually work. The cost to build the infrastructure was $65,000 to $70,000 per lot with a yield of 55 lots.

Homesites were backed up to each other and some were “landlocked” in a sea of surrounding homes. The way the home sites were placed made it not a very desireable place to live.

The project was redesigned and engineered using LID principals for SWM. An efficient road system with park like trails and open space parks that had duel functions as SWM facilities, replaced fenced detention ponds and large masses of asphalt.

The yield went from 55 cramped lots to 66 homesites with every site backing up to open space and a complex trail network that connected each home to an adjacent city park.

The actual cost of construction for the infrastructure was reduced to $42,000 per lot. The developer saved over a million dollars on the cost of the project and had 11 additional “livable” lots to sell.

Case #2: A high density single family project was brought to us during the low-point of the depressed housing market. Cost, yield and marketability were crucial if this project was to be successful.

This jurisdiction also had a performance based code and a Fee Simple Unit Lot Subdivision Ordinance that plays well with LID:

By duel purposing landscape areas and open space requirements with SWM, we were able to get 53 lots where 43 would have been difficult to get without LID.

The infrastructure costs were less than $17,500 per lot, and instead of spending large sums on vaults or fenced ponds, infrastructure dollars went into landscape, making a very liveable community.

Why aren’t you using LID?

If you’re a builder or land developer, call Merle at Land Technologies for the latest in Low Impact Development Strategies

Merle's passion is designing sustainable and livable communities, specializing in innovative planning and engineering. He has been on the forefront of designing “green” communities by advancing and promoting the use of Low Impact Development. Connect with him on Google+
View all posts by Merle Ash → 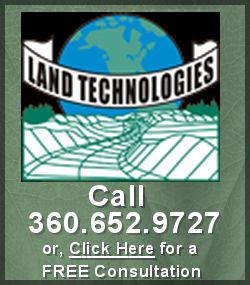